It was 2009 when LA hip hop collective (Tyler, The Creator would be offended being labeled “hip hop” because he’s evolving…) Odd Future started buzzing on line. It took half a blink for the entire world to be mesmerized by their antics, music, and interviews, perhaps in that order.

END_OF_DOCUMENT_TOKEN_TO_BE_REPLACED 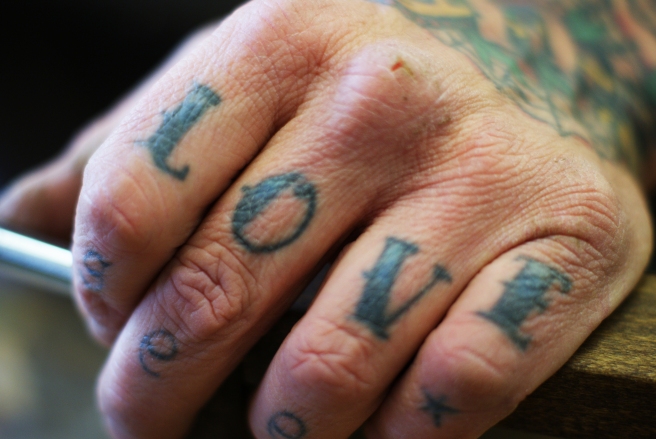 Nazis in tattooing are like boners at a funeral. They’re an unfortunate aspect but their existence doesn’t make you want to cut your dick off.

I don’t know why, but every TV show or movie with tattoo artists portray them as Criss Angel wanna-bes or illiterate rock stars who drink until the sun goes up. In reality many are just geeky art kids. They have comic book folders and see punk shows. Contrary to the popular portrayal of American television and movies, the world of tattooing tends to have political and philosophical ideologies polar opposite to those of white supremacists and Nazi skinheads.

The degenerate Nazi types of groups exist on the fringe of culture, whether the scene be tattooing, punk shows, or politics. They’re the Fred Phelps or Sarah Palin of the tattoo world, laughably annoying and without actual power.

My friend took a trip to tattoo up in northern California, near San Francisco. A Nazi walked in, wanting a Swastika on his arm. The artists sent him over to the guest artist, Hiro, who was visiting from Japan. The Nazi said, “I don’t give a shit who does the tattoo.”

Hiro told the guy $200 to tattoo the arm but only $25 to tattoo the Swastika on his hand. These sort of statements make the point. There’s subtext. The point of  “we don’t want to do your tattoo” is being made.

Artists tend to take the “fuck off” approach to Nazis and skinheads or really anyone who thinks Arian is an endearing term. Tattooers will throw ridiculous price quotes at them in hopes of scaring off their meth ravaged wallets. Most artists I know refuse to tattoo any Third Reich paraphernalia flat out. If any tattooer ever gives you a huge price for your tattoo idea then it’s because they don’t want to tattoo you. Maybe your idea sucks. Maybe you suck.

The one thing every artist can agree on, though, is they love to fuck with Nazis.

I once heard this “get what you got” story. Artists cut up this board so people could fit their arm or leg through the hole. If you paid the shop minimum you could stick an appendage through and you’d be guaranteed at least an hour of tattooing. Once a Nazi skinhead walked in and artists convinced him to take the “get what you got” deal. He stuck his arm through and when he pulled it out, fury ensued.

The artist had tattooed a pin up girl on his arm but with a big afro, round butt, and heavy brown shading.

That’s the problem of the Nazi who wants to permanently mark his skin with misguide hatred. You can’t find a decent artist who’ll tattoo you or if you do, at a reasonable price. My advice for these Hitler dick suckers is to call their friend Skeeter (I assume every racist has a friend named Skeeter) and have him do a good old fashion stick and poke tattoo. Then take your hepatitis like a man and move on with your life.

Check out our webpage

Warning: The mildest of SPOILERS if you really don’t want to know anything. END_OF_DOCUMENT_TOKEN_TO_BE_REPLACED

For some time now hip hop has surfaced as the overwhelming voice of the youth.  Corporations that once shuddered at the thought of this genre representing their products, now throw millions at artists for endorsement deals in hopes to of capitalizing on this wave that seems permanent.  What has been lost during the rise of popularity and paychecks however, has been the art of the music.  Albums specifically.  More and more the search for the radio hit takes precedent over the constructing of an actual body of work.  With so much competition nowadays, a rapper has a small window from getting your attention, to producing quality verses, to actually graduating to an artist that can carry their own project.  The Flushing Queens MC has had the attention of hip hop fans for a minute, Mr. Wonderful is the attempt to make you a permanent fan.

END_OF_DOCUMENT_TOKEN_TO_BE_REPLACED

Well, as you can see DC’s Convergence is upon us, and I’m fully committed to buying the whole story, so for the next few weeks any reviews I write will be focused on this story.

Bill And Ted’s Most Triumphant Return #2 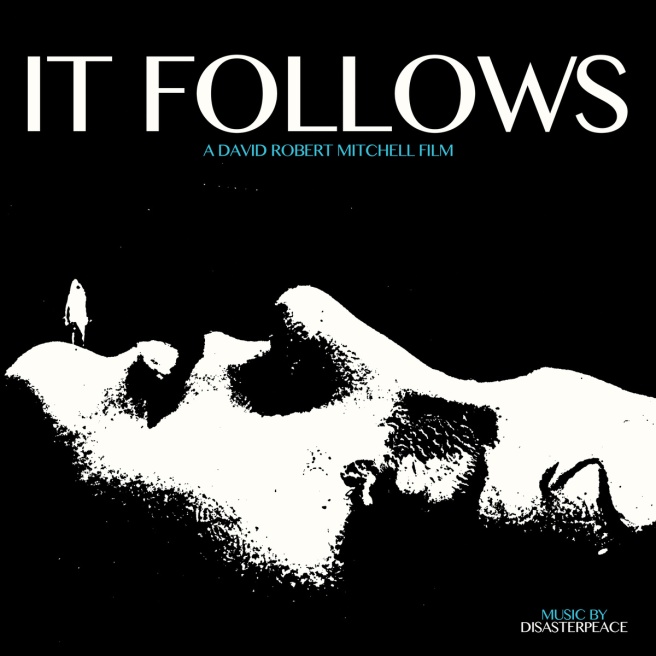 I must start this review by simply stating that “It Follows” is absolutely an awesome film. I consider myself a horror film fan above all other genres of film and believe in many ways it’s the hardest genre to execute. The music, the editing and the cinematography of this film are so exemplary that really any film fan can appreciate the craftsmanship at work and even when not being scary the film succeeds as great art. END_OF_DOCUMENT_TOKEN_TO_BE_REPLACED

Guardians Of The Galaxy #25

I recently lost my friend Josh. The story I’m told is that Josh was recently incarcerated and during his time behind bars developed a sinus infection. He was released on a Tuesday and died on a Friday. The infection spread to his brain and took him before he made it to a doctor. We met when we were 15 or 16 and ours was one of the many friendships that seemed to dissipate once I started my radio career in New York City. A Manhattan work week killed my tolerance for road trips on the weekends which is when I would hang out with Josh and that crowd who lived in the burbs of Philly. I also feel my perpetual exhaustion is to blame which my doctor attributes to my depression. When a weekend rolls around I just want to sit on the couch and catch my breath. Absolutely nothing like my weekends if you go a few years back. END_OF_DOCUMENT_TOKEN_TO_BE_REPLACED

Out of everything I’ve written forthis site so far, this review is by far the most daunting. Siike Donnelly, the brains behind Solestar, is a friend. I’m honored that he included me as a member of the “press” with the ability t

o review this. Granted, my plan was to write this review prior to the book being released, but since it was released 11 days earlier, I’m a little behind the eight ball. The point of that little ramble is that I’ve been trying to ramp myself up to write this review, because it’s difficult reviewing a friends work, especially if it isn’t very good. Luckily, that’s not the case with this book, and I don’t have to worry about padding any blows. What I am worried about is it sounding like I’m not be impartial in my review. The book has been released, and the luxury of ramp up time has come and gone.

The Adventures of Solestar started it’s life as a Kickstarter project, and was initially released in 2012. In the interest of transparency, when the book was first released, I skimmed through a copy of the book that a friend had purchased. Skimming it was as far as I got. I d  idn’t know Siike at the time, and I knew virtually nothing about the book or what its goal was. My reason for not r

eading it wasn’t because I thought it was bad. It was because I couldn’t wrap my head around the idea that there was a different artist on each page. At the time, it was a distraction for me, but after finally reading it, it is one of the things I enjoyed the most.

Since the book’s initial release, Siike has become an amazing friend. It started off with him simply being a guest on Mad Scientist Party Hour, and through interacting regularly, he’s become someone I talk to regularly and someone I admire tremendously. The reason this is important to the review is because it’s important that

you get an idea of the man behind the book. Siike is one of the most warm-hearted, sweetest, most genuine human beings that I’ve ever met. All of those traits come through in this story. Through getting to know Siike, I learned how much work it took for him as an aneurysm survivor to make this story happen. If there’s any one deserving of your admiration, it’s him. He’s overcome so much, he’s doing everything he can to bring awareness to brain aneurysms. He didn’t write this book for fame, glory, or profit. He wrote this book to raise money for the Brain Aneurysm Foundation. 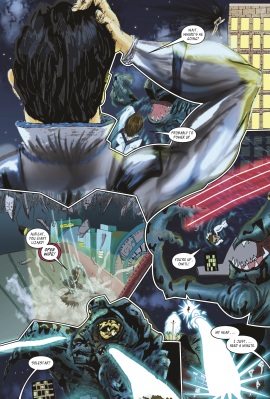 Every page of this book, whether it’s the actual story, or his explanation at the end, is filled with his everything that makes him who he is. In an effort not to spoil too much of the book, the story focuses on the main character, Solestar, spending his last days trying to make sure he’s leaving the world a better place. He manages to find the good in those many consider “Super Villains”. While that sounds like a plot device that’s been used again and again, it’s delivered in a unique way with 150+ artists lending their talents to this book. I’ll admit not all pages were my thing, and I have no problem with admitting that. My dislike for some pages paled in comparison to the pages I loved. I keep trying to find intelligent words to accurately describe T

he Adventures of Solestar, but I keep coming back to the same thing: Solestar has more heart in its pages than anything I’ve ever read, and that is truly and honestly a reflection of its writer.

Check out our webpage